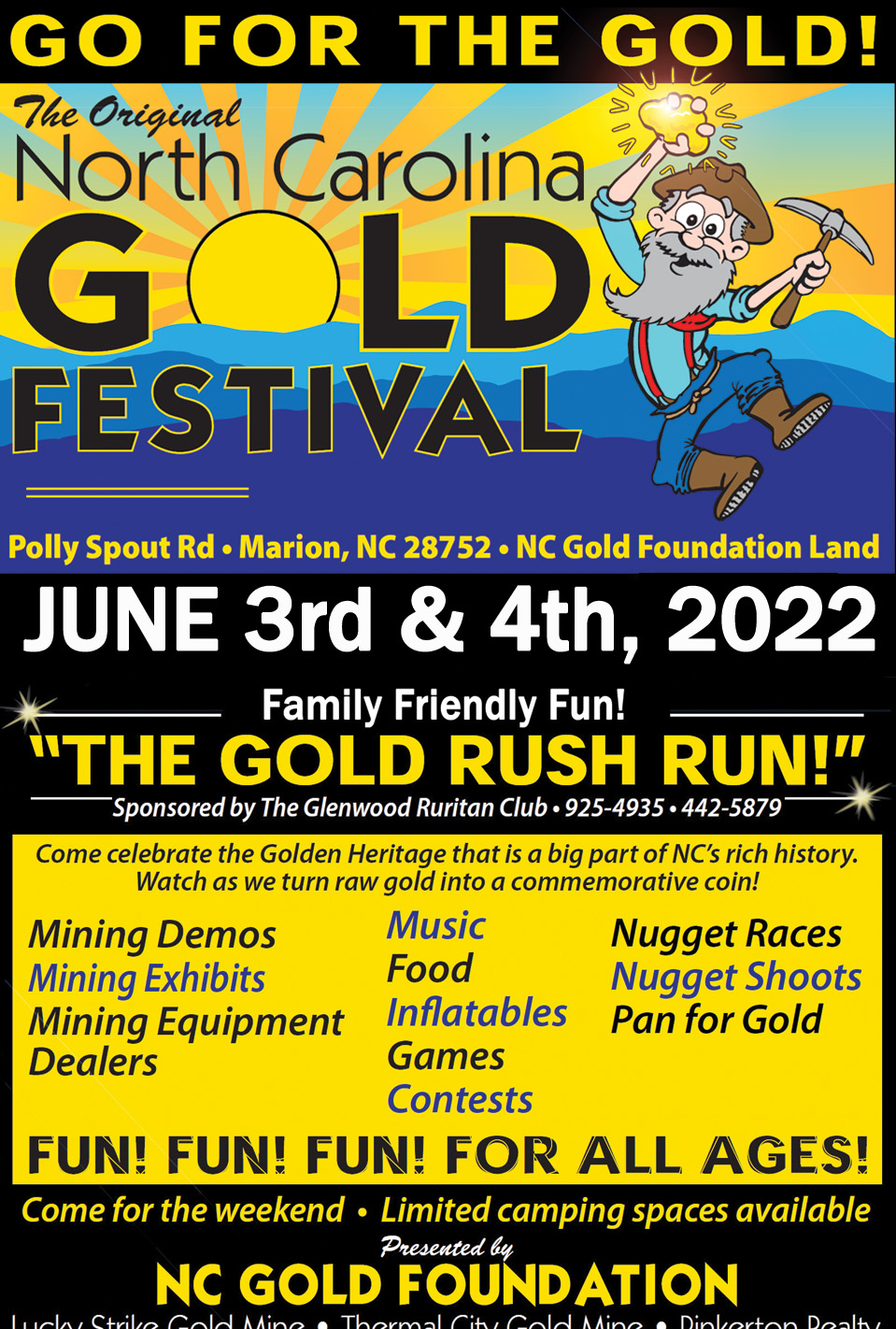 Welcome to the NC Gold Foundation

We're proud of our heritage and our place in history!

Did you know? Gold was found first in North Carolina?
Did you know? You can visit the sites where miners formed the first ever "gold rush"?
Did you know? There is still gold in those hills, and you can still pan for it!
Take a look through this site to find out much more about the living history of North Carolina Gold.

The Reed Gold Mine is the site of the first documented gold find in the United States. From this discovery, gold mining spread gradually to nearby counties and eventually into other southern states. During its peak years gold mining was second only to farming in the number of North Carolinians it employed. The estimated value of gold recovered reached over one million dollars a year. North Carolina led the nation in gold production until 1848, when it was eclipsed by the great rush to California

In 1799, 12 year-old Conrad Reed made the first documented gold find near Charlotte, in Cabarrus County. Soon thereafter, everyone from farmers to investors began to pan for gold. It didn't take long to create some 300 mines, employing locals and immigrants from South America and Europe.

As time passed, North Carolina became the only producer of domestic gold between 1804 and 1828. North Carolina was the highest gold producer in the nation, until 1848 when gold was discovered in California.

While there are plenty of stories and tales surrounding this period, the majority of mining activity occurred in the southern area of present day McDowell County, known as Vein Mountain.

Some streams and regions employed up to 3,000 workers. Members of McDowell County's "founding families" purchased acreage in the region. The McDowell and Carson families were at the forefront of this era, also sending slaves to work their mines. Some slaves became free men after working those stream beds and mines.

Successful miners created the Marion Bullion Company and just over the current county line the Bechtler Mint began operating. Evidence of the two are found today at Historic Carson House in Marion and at the Historic Bechtler House in Rutherfordton. During the 1950s, miners graduated from using earlier tools such as pans, sluice boxes and rocker troughs to implementing hydraulic mining methods.

When you visit area recreational mines, more than likely the mine was once a busy, commercial mining site. Today, North Carolinians operate many active commercial mines. Those found in western North Carolina, produce minerals used in electronics and a variety of other technical devices.

*Information taken from: History Of McDowell County by Mildred B. Fossett Copyright 1976


Be one of the first to display "First in Gold" on your vehicle!

The NC Gold foundation are currently inviting fellow NC Gold lovers to join us in proudly displaying their pride with a beautiful NC License Plate showing the historic gold panning of the 1800's, with with the words "First in Gold" emblazoned across the top.
The license plate costs as little as $20 per year on top of your regular tag fees. 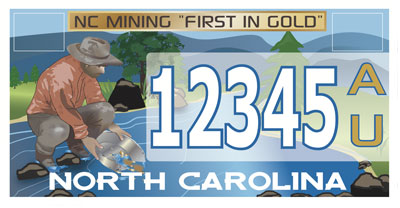 Currently we are looking for the first 300 people to sign up for the new license plate. Once this figure has been reached, the DoT will create the license plates, and later on make them freely available in every tag office across the USA.

Where you lead, others will follow... Be the first to own "First in Gold"

Simply download and complete the application form found here, and once we have reached the amount of applications necessary we will pass them on to the DoT for completion.

If you have any further questions, please do contact us.

Thanks for supporting our heritage!

In 1832, Christopher Bechtler of Rutherfordton minted the country's first one dollar gold coin (17 years before the U.S. mint). During the mid-1800s, the Bechtlers minted more than $2.24 million in gold coins. Explore the original location of the Bechtler mint and mine shaft.

The site is a small park with a short loop walking trail with information boards that tell the story of local gold mining. 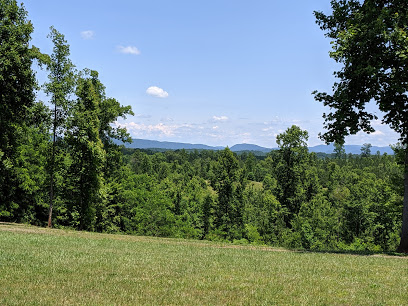 Look for the gold panning signs, and follow the rules - the greenway is a multi-purpose area. 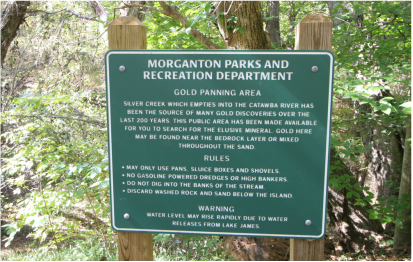 Enjoy a nostalgic change of pace and step back in time as you stroll along the wood sidewalks of this restored nineteenth century Gold Mining boom town.

With its first gold discovery in 1824, Gold Hill is considered one of today's  most charming, historic small towns in North Carolina. Home to a quaint shopping village, a 70 acre park with beautiful scenery, it is quite easy to get lost in time as you discover all there is to see here. 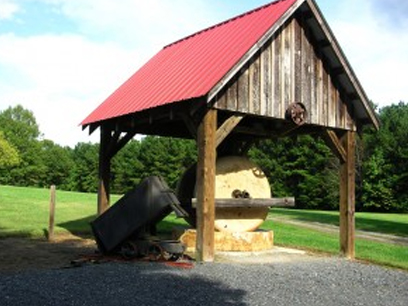 Jims, Gems and Gold LLC. brings the thrill of panning for genuine gemstones and gold to Moore County, North Carolina. Whether you come as a family, birthday party or group, Jims, Gems and Gold is the perfect choice for a day of fun. Both young and old will enjoy the experience and wonder of finding their own treasures. 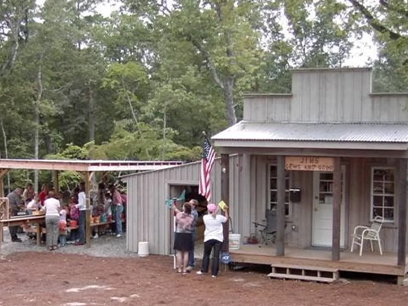 The Lucky Strike is a gold and gem mine with a campground that is committed to making sure our visitors have a memorable outing. You can take a step back in time to the days of yesteryear by taking a pan or sluice box into the stream.

Experience the thrill of that golden gleam in your pan that only finding your first flake of gold can give. It immediately inflicts you with what the old timers called gold fever. Beware; when you see that first glint of gold in your pan you will be hooked! Gold fever has no cure but to hunt for more gold.

We also have Gold Panning at the flume line with local ore from the Second Broad River. When you get tired or hungry you can visit the Miners Diner , located next to the covered panning area and have a delicious Bonanza burger or Klondike dog with a frosty glass of Sluice Juice. 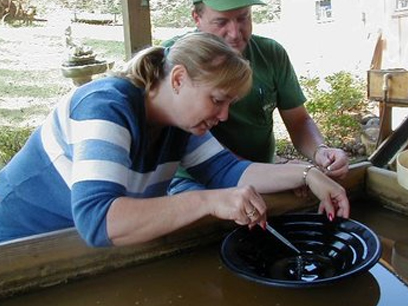 We are located in New London NC off of HWY 52 North. We are open 7 days a week from 8am to 5pm. Here there are different ways of prospecting for gold such as panning, dredging, highbanking & sluicing.

We also have campsites for rent, you can pitch a tent or stay in a camper/cabin. 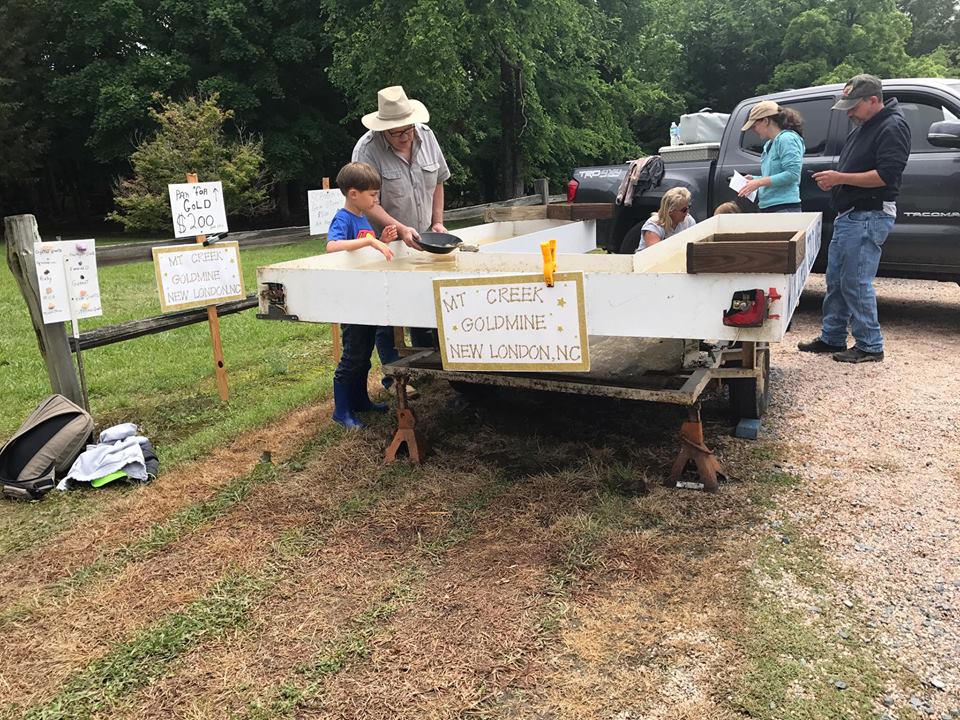 Reed Gold Mine is the site of the first documented gold find in the United States. From this discovery, gold mining spread gradually to nearby counties and eventually into other southern states.

Today, portions of the underground tunnels at the Reed mine have been restored for guided tours. A visitor center contains exhibits of gold and historical mining equipment. An orientation film highlights the first gold discovery, and tours of a restored ore-crushing stamp mill are offered. A picnic area is available, and you can try your hand at gold panning. Trails wind through the historic mining area, too. 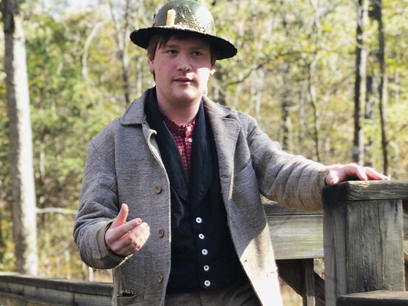 Thermal City Gold Mine offers a unique experience hosted by people who are real prospectors! We are dedicated to keeping the tradition and history of Gold Mining in North Carolina alive. Anyone who wants to pan or prospect for gold is welcome. We enjoy teaching and talking about mining! 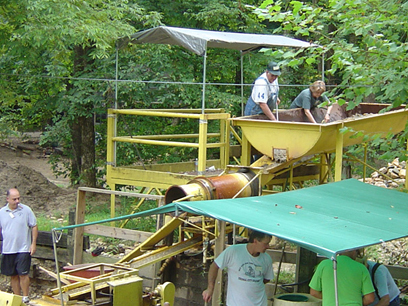 We'd love to hear from you!

Or use the form below to contact us via email. we will do our very best to get back to you within one business day.